Home/Time to put the nail into the coffin of “Poinsettias are poisonous to people!”

Time to put the nail into the coffin of “Poinsettias are poisonous to people!”

Every year at about this time the question inevitably arises of whether poinsettias are toxic. These lovely and festive plants, which were brought to the US from Mexico have been erroneously listed as having poisonous sap. Like zombies, this myth refuses to die and keeps stalking parents, who fear for the safety of their little children.

Unfortunately, when poinsettia producers attempt to allay these fears, they are considered less than trustworthy, since they are trying to sell plants, after all.

Well, full disclosure: I do not own, partially own, or even want to own a nursery, greenhouse, or floral production center (too much work), although I do like to purchase poinsettias for my home and office. So my interest here is purely academic.

Let’s dive into where this story of toxic poinsettias came from, for it is a story. 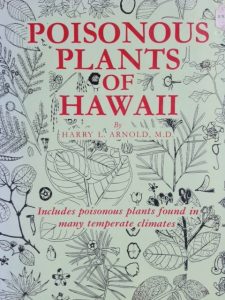 In 1944, someone named H.L. Arnold published the book “Poisonous Plants of Hawaii.” In it, he repeats a bit of gossip about the death of a two year old child who died after eating a single poinsettia leaf. The problem is that this occurred in 1919, 25 years prior to the book publication, and even H.L. Arnold later admitted it was an unconfirmed “report.” Unfortunately this incident morphed into a “fact” and has been carried forth in numerous books on poisonous plants, without being verified.

Enter two medical researchers and a pharmacist, in 1995, who decide to determine whether poinsettias were indeed toxic.

The team examined eight years of calls to the American Association of Poison Control Centers, of which nearly 23,000 involved either eating parts of poinsettias or getting poinsettia sap on the skin (dermal exposure). More than 90% of the calls involved children, and more than 75% of these were younger than two years old. 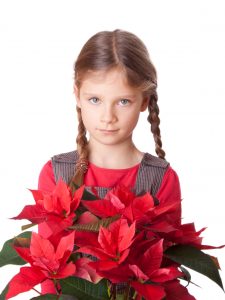 The outcome? No fatalities, no effects at all for more than 90% of those who either ate plant parts or who had come into contact with the sap. Of the 22,000 people who did eat tissue, 3% reported minor effects (the person exhibited “minimally bothersome symptoms”); and 0.05% (12 people) reported a moderate effect (symptoms were “more pronounced, more prolonged, or more of a systemic nature,” but were not life-threatening). Unfortunately the paper in which this information is reported does not say what the nature of the symptoms were, but of 2.3% of the people who either sought medical aide or were referred by the poison control center for medical assistance, three quarters were released without treatment. Treatment usually involved “irrigation,” by which I think they mean “drinking lots of water.”

For those who had dermal exposures, only 6 of over 1,000 people experienced more than a minor irritation, and even this was alleviated by washing the skin with water.

What could cause skin problems? There are a few reported terpenoids (complex aromatic compounds) present in poinsettias that can result in dermal irritation when the leaves or stems are broken and sap oozes out. Some of the worst cases of skin rashes and blistering result from prolonged contact with sap from large landscape plants, such as when cutting back overgrown poinsettias growing outdoors or in a greenhouse.

As with any plant sap, it is a good idea to keep it out of your eyes, so wash your hands after handling plants.

One precaution: Those with allergies to latex will likely also be allergic to poinsettias. Severe allergic responses are possible, especially in very young children.  Avoiding use of products containing latex and staying away from poinsettia plants will prevent problems of this nature.

Stories with no factual basis can be difficult to eradicate from the public consciousness. The myth that poinsettias are poisonous to people needs to be put to rest, permanently.