Earlier this year the fungus Cryptostroma corticale was found infecting a sycamore maple in Seattle by an alert arborist. This disease was first reported in eastern Washington nearly 50 years ago, and then it sank out of sight – until this spring.

Sooty bark disease has been causing dieback for years in the U.K. and central Europe, primarily in sycamore maples (Acer pseudoplatanus), although box elders (A. negundo) and Norway maples (A. platanoides) can also become infected.

The fungus is thought to infect and kill small, inconspicuous branches, after which it moves from the branches into the heartwood where it continues to proliferate, growing up and down the tree. An infected tree may be numerous small dead twigs that line up one side of the trunk, or small cankers on the trunk. Heavily infected trees may have leaves that wilt over part or all of the canopy. 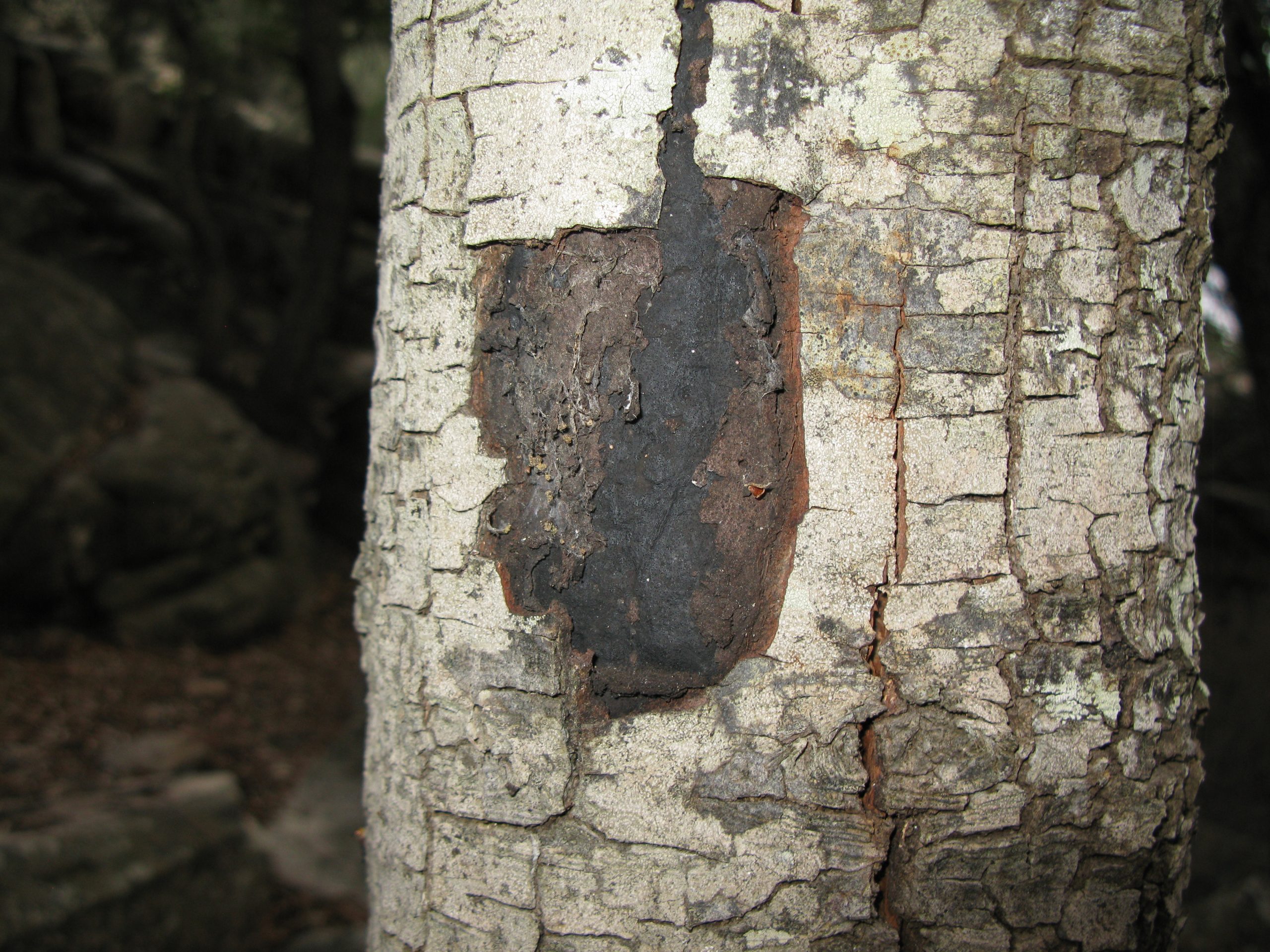 Sooty bark disease on an oak in the Italian region Sardinia caused by another species, Biscogniauxia mediterranea.

This is where the hot weather comes in. The rate of growth of the fungus is greater at higher temperatures and is more rapid in an infected tree when the summers are hot. The fungus can grow quickly within the tree if it has been stressed by drought, particularly if multiple years of water stress have occurred. With high temperatures,  the fungus grows rapidly from the center of the tree out toward the bark. Once there, the fungus kills the bark, causing it to blister. The fungus reproduces by forming spores, pushing the bark up to reveal billions (yes – with a “B”) of spores present between the bark and the wood These spores are a dark gray color, and their masses resemble soot, hence the name sooty bark disease. Once the spores disperse, the remaining tissue beneath them looks black.

The spores may cause a severe allergic reaction in susceptible people, which has been a problem for those working around diseased maples, such as arborists and loggers.

The disease was also recently found in red maple (Acer rubrum) and big leaf maple (A. macrophyllum), also in the Seattle area. This is particularly worrisome, as these species were not previously known to be susceptible.

What to do?  Be observant of maples in your yard. One clue a tree may have this disease is the greenish-brown to greenish-yellow stain that can be seen when an infected branch is cut into cross-section. The staining is in a single column, not streaky, as occurs with Verticillium wilt. HOWEVER, this staining by itself does not confirm the tree has sooty bark disease (other things may also cause wood staining), so confirmation by laboratory tests is essential

There is excellent information about sooty bark disease at forestpathology.org.