I’m pretty sure Neil Young didn’t intend his song entitled “Rust Never Sleeps” to become an unofficial anthem of fungal plant pathologists, but that is what it became. We’ll take what we can get.

You see, rust is a name for a group of fungi that cause yellow or rust-colored pustules of spores on leaves. Stripe rust of wheat and other cereals is a significant disease, as infected plants can have so many pustules breaking through the leaves that the plants do not yield well, resulting in economic losses. This disease was recognized by the Romans in the 1st century BC, and considered so important that a red dog was annually sacrificed to the god Robigus, the Corn [wheat] God on April 25th. This was around the date that rust was noticed on their wheat, and it was hoped that bribing the god with the dog would convince him to go easy on the rust disease that year.

Well, sorry to say we missed that opportunity, and rust diseases are doing quite well. I’ve seen rust on wild and domestic rose, serviceberry, hollyhock, clover, and grassy weeds – without even trying.

Rust diseases encompass multiple genera of fungi – there is no such thing as THE rust fungus – and these fungi have amazingly complex life histories. Some of them produce five different spore stages, and many need two different plant species just to complete their life cycle.

In spite of all this, they are very successful pathogens and have co-evolved with their plant hosts to the point where infected plants don’t die (that would kill the rust fungus, after all), but they just don’t perform as well. Rusts are also rather particular, and do not infect many plants widely. Rather, an individual rust species will only infect one or a few related plants.

If your hollyhocks are looking puckered and poxed, it is rust. If your roses have small colorful red spots with orange centers, it is rust. If you noticed bright orange dust on your serviceberry, or even on wild roses, earlier this spring, the “dust” was rust spores. Blackberries, St. John’s wort, evergreen huckleberries, junipers, incense-cedars, and hawthorns are just some of the plants that are susceptible to rust diseases.

Because these diseases often grow and produce spores on a plant of an entirely different type (e.g. conifers, ferns, or weeds), management is challenging. In some years disease is hardly noticeable, but in others, such as this year with our mild and rainy spring days, conditions have been excellent for proliferation of these diseases.

Some examples of rusts you may see and information about them (including management tips) can be found at the links associated with their photos, below. And a pretty cool video about how rust fungi infect plants and how plants can repel rusts, can be found at the top of this post. 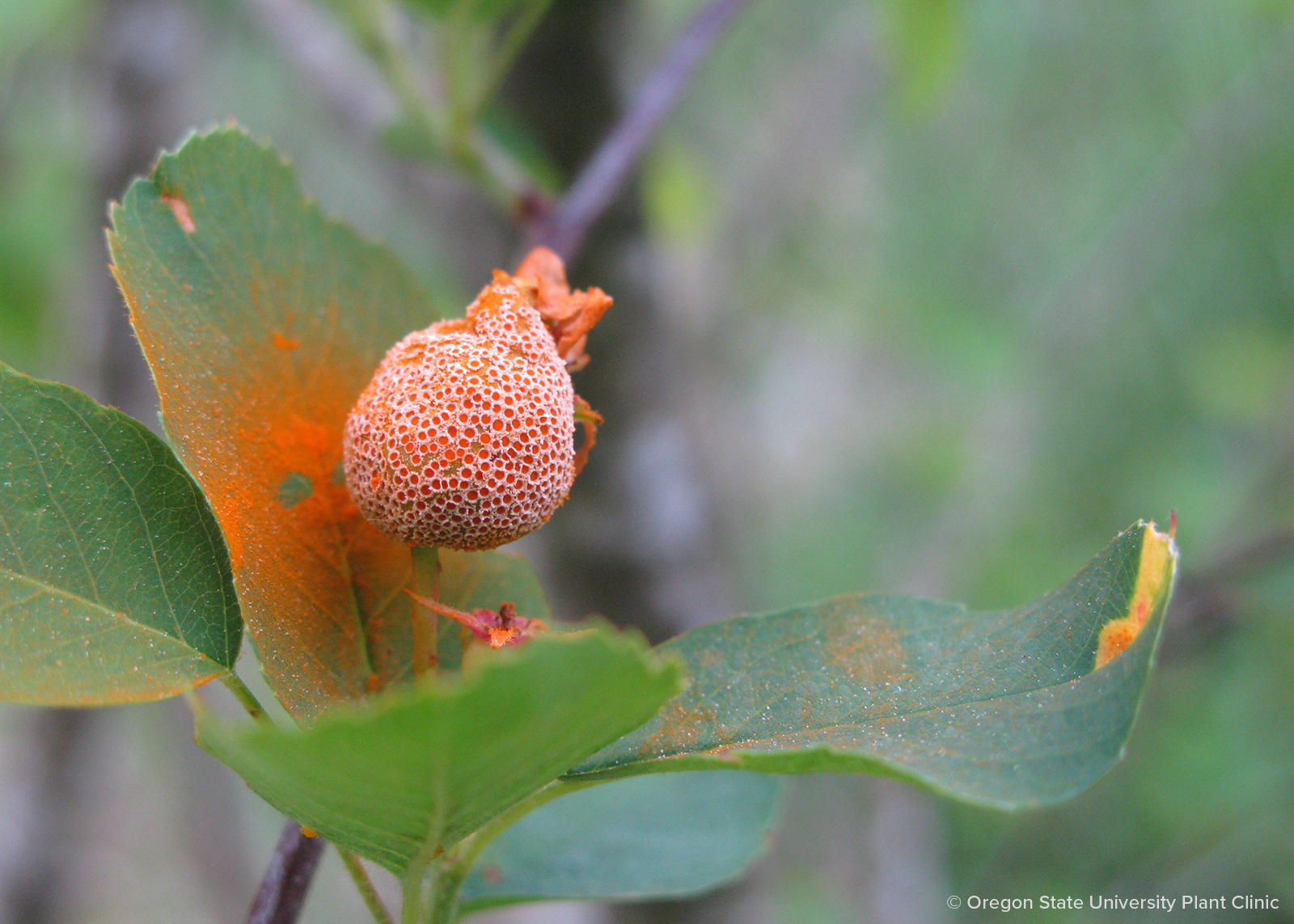 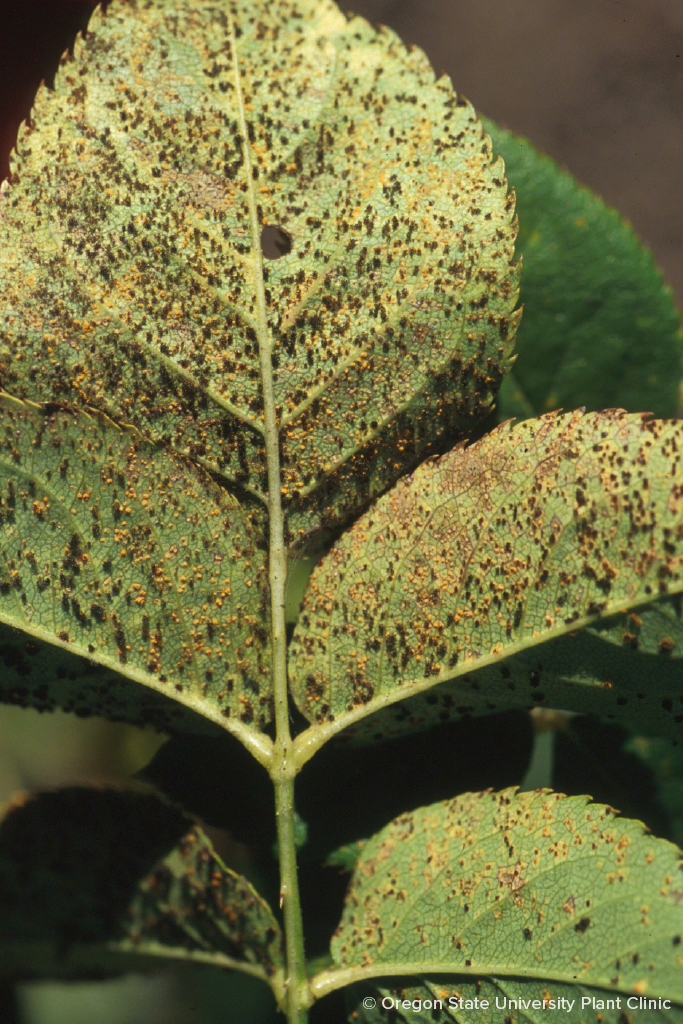 Later in the season, a different spore stage will form on infected rose leaves. The black dots here are the teleospores of the rose rust: PNW Plant Disease Management Handbook 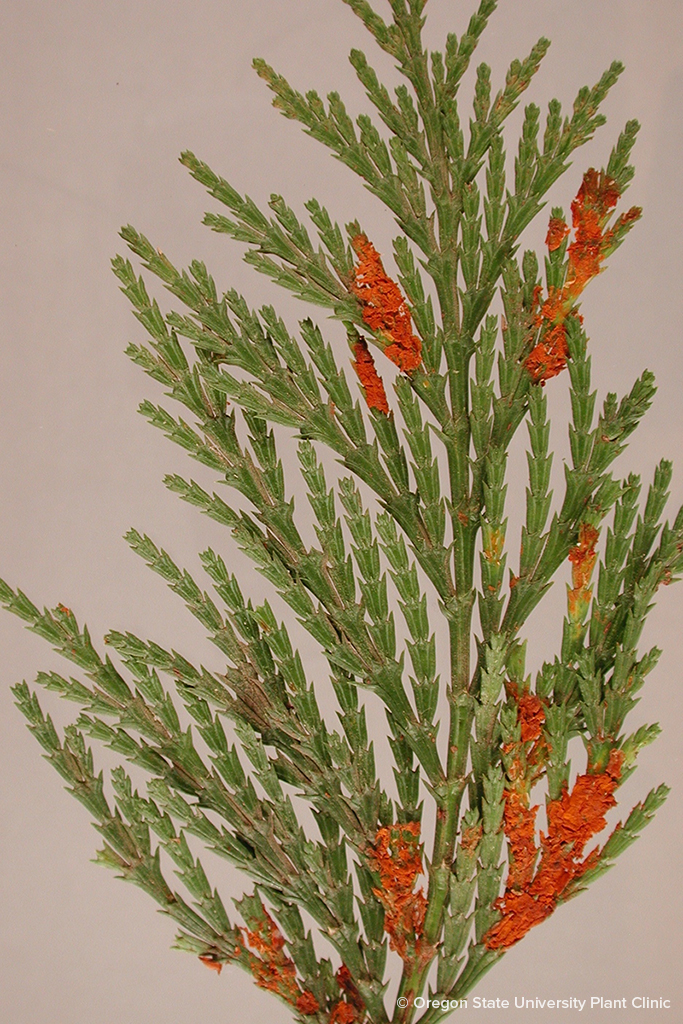 Rust spores on this incense-cedar, which occurred earlier this spring, infected the serviceberry, which produced a different spore stage. This fungus can also infect apples and hawthorns: PNW Plant Disease Management Handbook 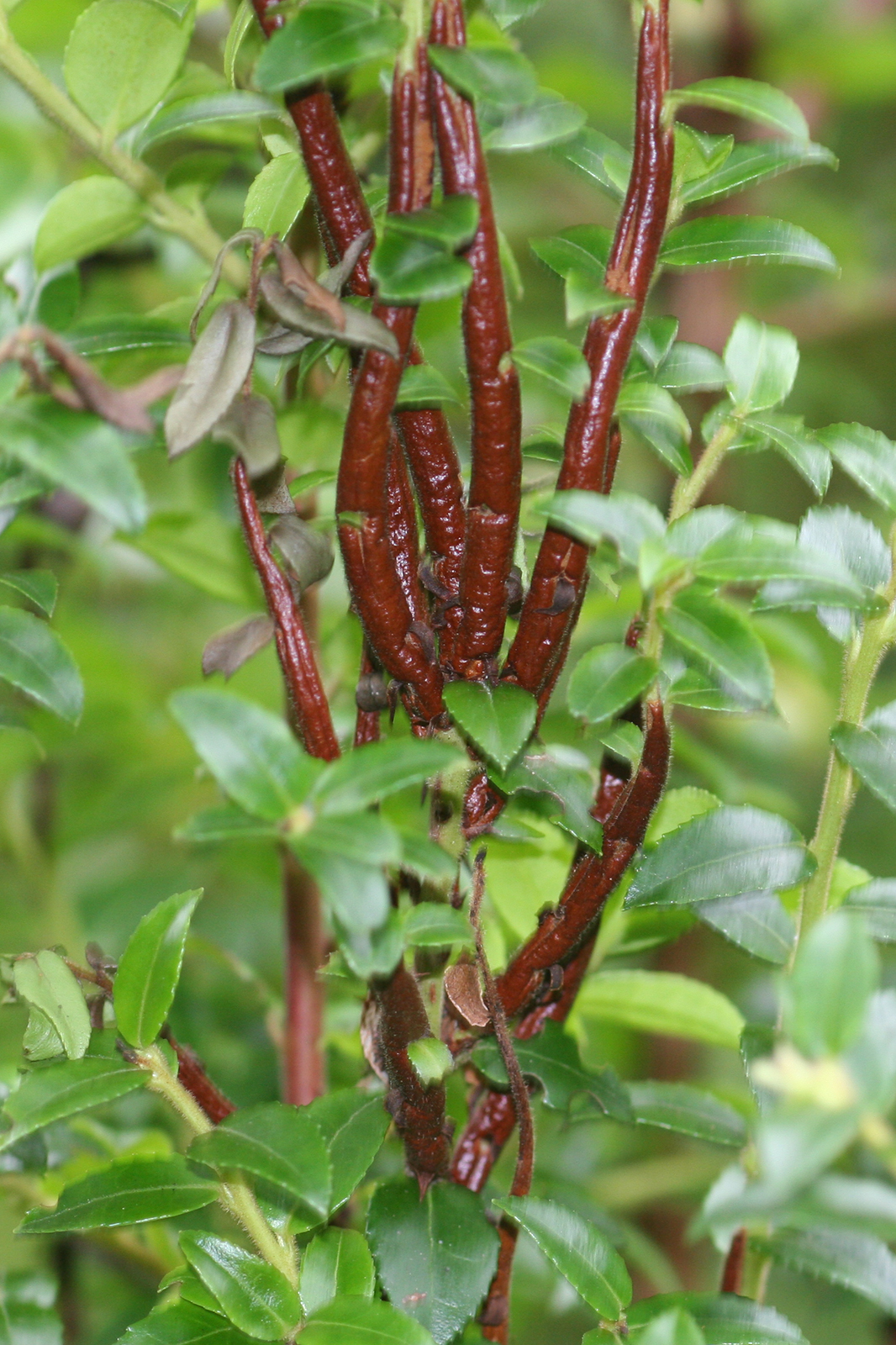 Rust diseases can also infect native plants, such as this evergreen huckleberry. The rust disease in this case causes swellings of the twigs. The alternate hosts for this rust are true firs. Photo credit: Jeff Stone. 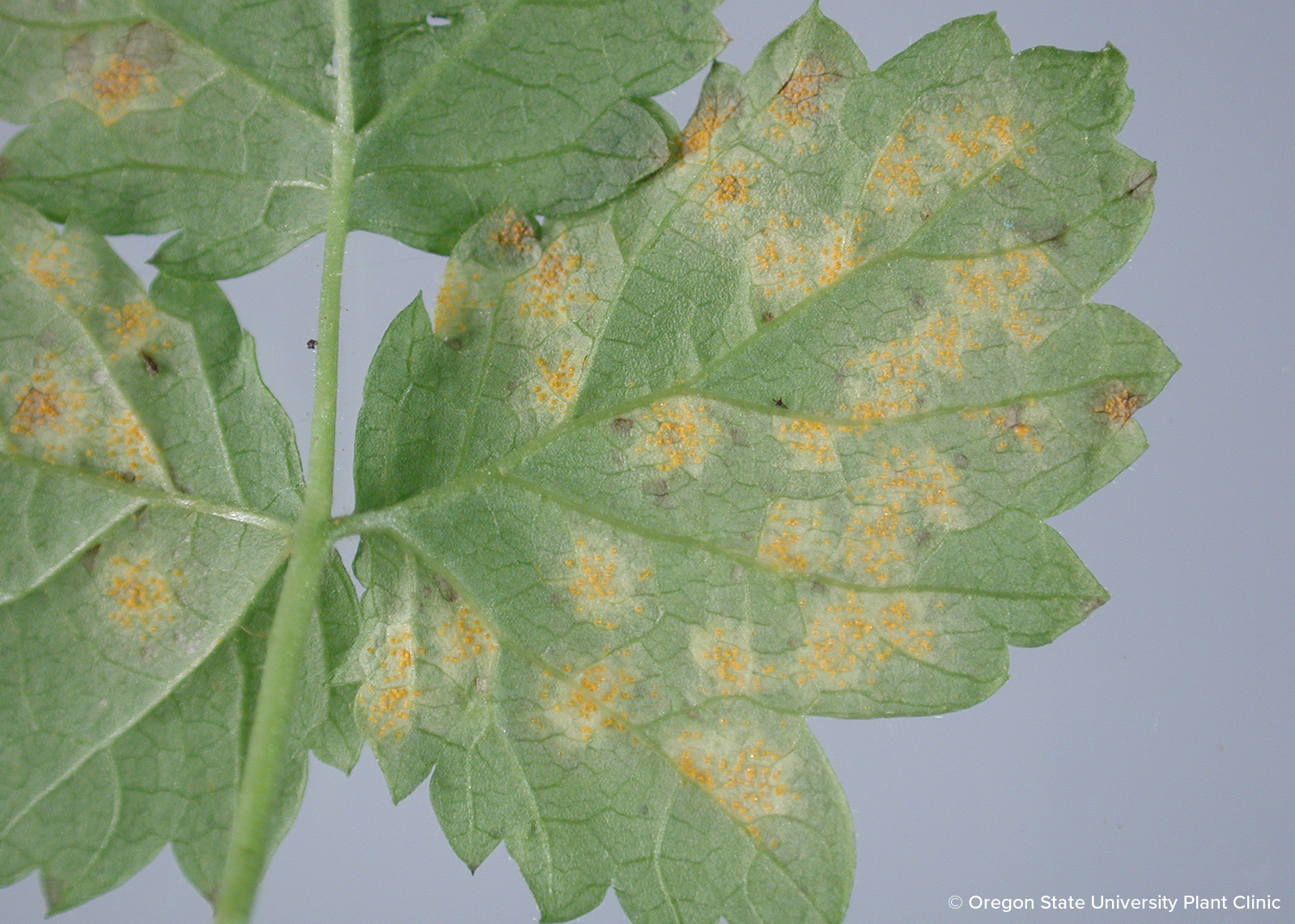 Some rusts look more yellow than orange. Here is sporulation on the undersides of a blackberry leaf, caused by leaf rust: PNW Plant Disease Management Handbook 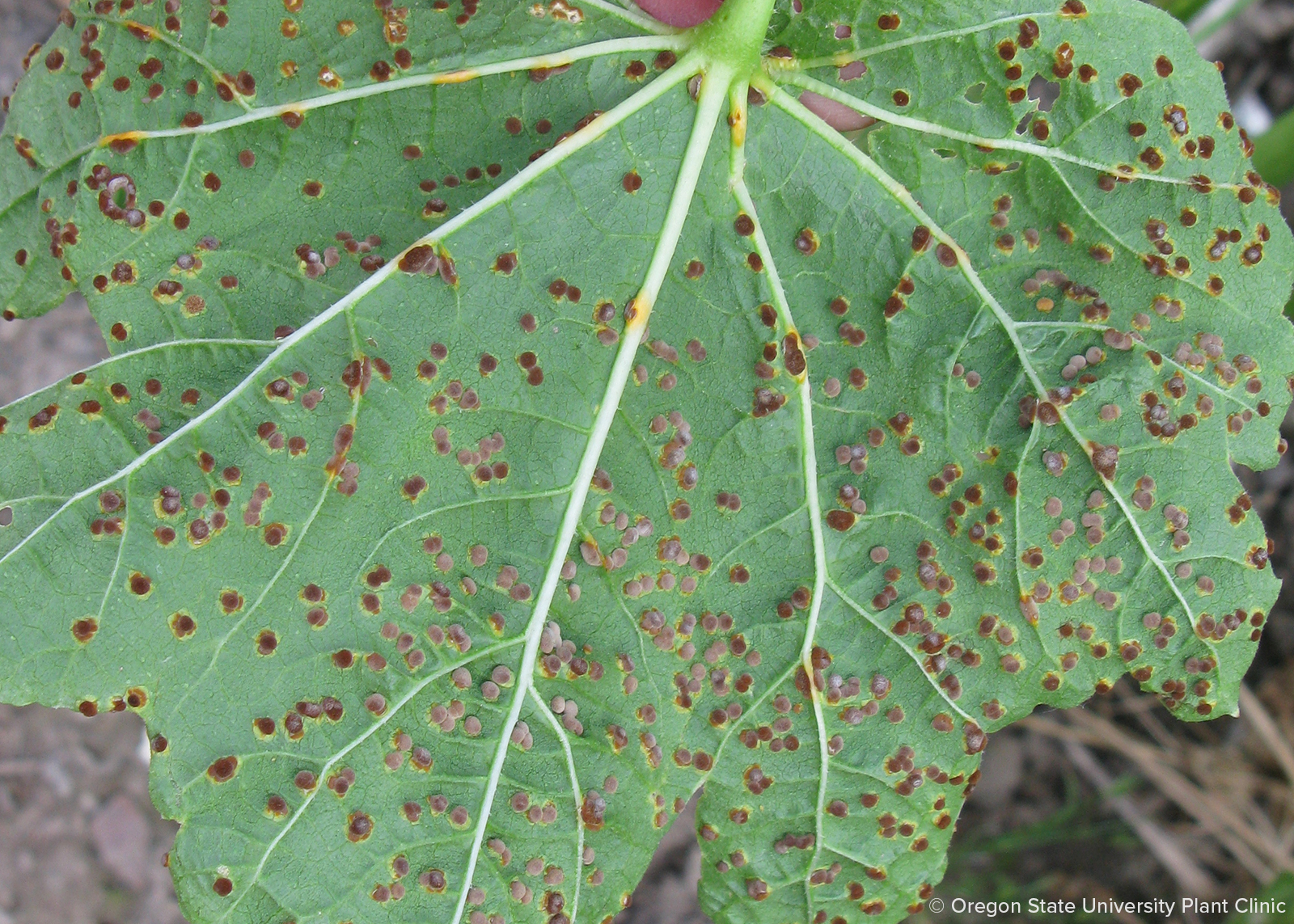 Close up of holly hock rust.