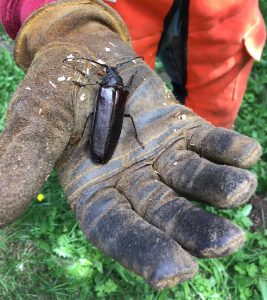 Several inquiries have been submitted to the OSU Insect ID Clinic about a conspicuously large beetle that you may have noticed outdoors. Most folks are curious to know a little more about it, so here’s your introduction to the ponderous borer beetle.

The ponderous borer is probably the largest beetle that occurs in Oregon. Even though it is so spectacularly large that it looks like it should come from a tropical rainforest, it is actually native here.

This species is fairly common in our area. They occur in forested areas of western North America. Their larvae bore into and feed on wood of recently dead or dying conifers, especially Douglas-fir and Ponderosa pine. So in that way, they help recycle the dead wood in forests.