Jerusalem crickets (no relation to Jiminy)

Home/Jerusalem crickets (no relation to Jiminy)

Jerusalem crickets (no relation to Jiminy)

Jerusalem crickets seem to fascinate those who find them. Also known as potato bugs, devil’s babies, and niña de la tierra (child of the earth), they are members of the genus Stenopelmatus and are related to katydids and cave-dwelling camel crickets. Most species are wingless, and although there are two species that are winged, Jerusalem crickets remain flightless throughout their life. Their legs are equipped with strong spines that they use for digging, which comes in handy as they generally live under rocks or logs. They move about on the surface of the ground mostly at night. The reports we have of them are from central, eastern, and southwestern Oregon, although they probably occur throughout the state. Their nocturnal and subterranean habit makes them a rare find during the day. 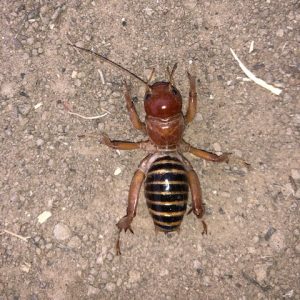 Jerusalem crickets feed on decaying organic matter, below-ground plant parts, and have been known to be reared on cat food. They can also feed on other insects. Although they are not aggressive, they do have powerful jaws and can give a painful, but non-venomous, bite if they feel threatened. They can also emit a bad odor when disturbed.

As for the origin of the name Jerusalem cricket – all the explanations I’ve read have been as colorful as their names. The only solid fact is they are not from Jerusalem, nor are they true crickets.